Death Under the Mistletoe: A Valentine Christmas Mystery… FREE

You know that saying, “when it rains, it pours?” That seems to be my life lately. Just when I think I’ve got myself organized to get everything done, something new is added. Between that, and a struggle to pace my work, I’ve running around like a mad woman.

I just turned in a draft of Southern Persuasion, book two of the Southern Heat series for review by my agent.  It’s a bad draft. I’m hoping my agent will be gentle. I’m expecting the copy edits on the first book, Southern Comfort, sometime this week. The three-book romance series will be released in 2016 by Penner Publishing. 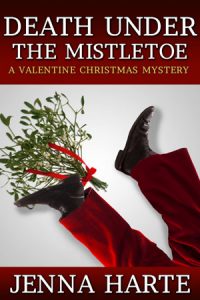 Despite all the chaos and busyness, I fulfilled my promise to release a Valentine story by Christmas. As a thank you to everyone who has been a fan of the Valentines, Death Under the Mistletoe: A Valentine Christmas Mystery (novella) is free. It’s available in .mobi (Kindle) and .pdf over in the SweetHarte group at Facebook. If you’re not yet a member, join and you’ll find the book under the “Files” tab. There’s no cost to join the group. You’ll get some freebies, heads up on new releases, behind the scenes info about the Valentines and other books, plus I frequently ask for help and feedback.

The novella will be available shortly at Amazon.

Description of Death Under the Mistletoe

Tess is excited to spend her first Christmas with her sexy husband, Jack Valentine, that is until the mall Santa staggers in her shop and drops dead underneath the mistletoe on Christmas Eve. There’s no shortage of suspects who wanted Santa dead. Was it his jealous elves? His estranged wife?  The in-laws who never thought Santa was good enough for their daughter? Or the neighbor who secretly coveted Santa’s wife? Although Tess and Jack are happy to let Detective Daniel Showalter deal with the case, somehow the newlyweds end up a target of Santa’s killer who plans to make sure Jack and Tess never celebrate Christmas.