The release of Drawn to Her, Book One in the Southern Heat Series is here! Check out reviews and read an excerpt below.

About Drawn to Her 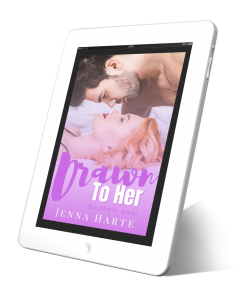 Drake Carmichael doesn’t trust the nurse who’s taking care of his grandfather—despite how adorable and compassionate she seems. He refuses to let her get her grips into their hard-earned money. But as the two square off and begin to battle about what is best for the dying man, Lexie and Drake realize they know very little about each other and that first impressions are deceiving. Once they finally give into their desires, the battle has only just begin.

Advanced Reviews of Drawn to Her

Wow. What a roller coaster ride of emotions! This book will hook you and take you for a ride. I was frustrated, angry, upset, sad, elated at various points within the story and I LOVED it! ~ Kelly’s Book Blog

Overall, I found this North vs. South clash of cultures/wills quite entertaining. The writing style flowed, and I was so fully engaged I couldn’t put it down. ~ A Klue from Goodreads

Drawn to Her was definitely a fun read that left me in a good mood when I was done. ~ Lauren from Goodreads

Excerpt from Drawn to Her

“You wouldn’t be trying to take advantage of a dying man, would you?” He grinned at her, despite the fact he was indeed dying. At least he is dying on his terms. Lexie admired his courage to abandon his life of riches in New York to live out the rest of his days in his quiet, childhood home, in Charlotte Tavern, Virginia. He was comfortable, or as comfortable as could be expected when dying of lung cancer.

“Oh, please, you’re richer than God.” She gathered the cards and prepared to shuffle them. “I couldn’t win enough dough to dent your stockpile of money.”

He laughed. “You got that right.”

“Since you can’t take it with you, I might as well pad my pockets with your loot.” She dealt them each seven cards, glad he was in good spirits today. Being his personal nurse hadn’t always been card games and banter. Oliver was the definition of cantankerous with his brusque demeanor, quick temper, and low tolerance of others. His illness hadn’t improved his attitude. Lexie understood it was difficult for a larger-than-life man such as Oliver to accept his mortality and the limitations imposed by his illness, but that didn’t mean she was going to put up with his surly behavior. Over the six weeks she’d been his private nurse, they’d come to an understanding; whatever he dished out, she gave back. As a result, Oliver’s behavior had improved, and they’d become friends.

“Double or nothing?” Oliver picked up the cards she dealt him.

“What the hell?” A man stepped into the room.

Startled by the intrusion, Lexie turned to the man behind the deep, harsh voice. “Great day!” She drawled the southern expression of surprise and dismay, under her breath as a scowling, very tall, broad-shouldered man approached. In Lexie’s world, nearly everyone was taller than her, but this man was humongous, not just in size but in presence as well. He swallowed up space with each step until the room shrunk to the size of a closet. His narrowed gray eyes moved from her to Oliver. His dark foreboding stare reminded her of Oliver when he was in one of his moods.

Finally, someone has come to visit. Except that a glance toward Oliver told her neither man seemed particularly happy.

“What are you doing here?” Oliver’s scowl matched the man’s although his voice, raspy from cancer, didn’t match the dark intensity of his features.

“I’m sick.” Oliver slunk down in his covers, letting his eyes drop to half-mast.

Lexie frowned. Oliver wasn’t one to take orders or be intimidated by others, and yet, instead of telling this man to take a flying leap, he hid under his blankets.

The change in Oliver’s demeanor concerned her. “Who are you?”

Lexie’s hackles rose. Who did Tall, Dark, and Brooding think he was coming into her home, well, Oliver’s home, making demands like he owned the place?

“Harrumph.” Oliver straightened in his bed. “Lexie McKenna, this is my grandson, Drake Carmichael. Drake, this is Lexie, my nurse.”

Lexie’s annoyance was lessened slightly knowing someone in Oliver’s family had finally come to visit. She’d made so many calls and sent several letters, all of which had been ignored. She stood and extended her hand. “How wonderful that you’ve finally—”

“Nurse? What the hell kind of nurse jokes about dying and taking your money?” Drake stepped close to her, towering his imposing body over hers, causing a shiver that had nothing to do with fear or intimidation. She should have been wary. Instead, she was intrigued. “Your bedside manner is lacking.”

“Now wait a minute.” Lexie ignored the crackle of electricity zapping within the narrowing gap between them. She wasn’t going to let some stranger, no matter how big, mean, and gorgeous, intimidate and insult her. Unfortunately, at five-three, she only came to his chest. Not a good vantage point to make a statement.

“Hold that thought.” She grabbed the step stool next to Oliver’s bed and gained the extra foot she needed to look Drake in the eyes. “You have some nerve.” She poked him in the chest with her index finger, ignoring the jolt of heat zapping her each time she felt the hard, firm muscle underneath his starched white shirt. “Where have you been all this time your grandfather has been sick? You never once called or sent a note.” She glared at him, pleased at the surprise in his steel gray eyes.

His surprise quickly changed to disconcertedness as his dark stormy eyes sized her up from head to toe and back again. He glared at her with such intensity, she worried she’d whither into nothing. But she wasn’t a delicate flower. She gathered her resolve and turned her stare on him, openly assessing him back. At first, his eyes remained hard and cold but, upon closer inspection, there was something smoldering and compelling hidden behind them. As quickly as it was there, it was gone, and his gray eyes turned flat and unreadable.

Lexie ignored Oliver’s attempt to get her attention because she couldn’t turn away from Drake no matter how forbidding his eyes. She wasn’t about to give him the satisfaction of flinching first. At least that was what she told herself as she continued to hold his gaze. It wasn’t easy with her heart hammering and her knees turning to jelly.

“I hate to interrupt this moment, but I’d hate for someone to get hurt,” Oliver’s voice cut through the standoff.

“It’s not Lexie I’m worried about.”

Lexie’s lips curved in satisfaction. That’s right, buster. You don’t scare me. You might make me swoon, but you don’t scare me. With the battle of wills over for the moment, she turned on the charm southern women were famous for.

“Let’s try this again. It’s a pleasure to meet you, Mr. Carmichael.” She held out her hand.

He looked at it as if she had cooties. Finally, he grasped her hand, his long fingers wrapping fully around her hand in a firm, although not crushing grip, as she might have expected.

“Ms. McKenna.” His voice was rough, laced with annoyance. Even so, he held her hand, his gaze boring into hers as if searching for something. Her heart skipped a beat at the heat of his gaze. It was oddly thrilling, yet terrifying.

“Why don’t you sit here?” She disentangled her hand from his before she turned to mush, motioning to a chair near Oliver’s bed. “And, you.” She fixed Oliver’s covers and moved the over-table out of the way. “Be nice.” Casting Drake one last glance, she left the room.

Order Drawn to Her